This is Official! Name Changing News! 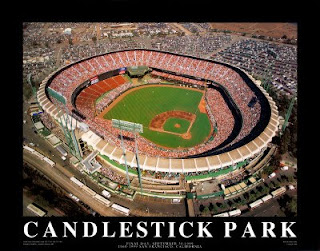 Candlestick Park (home of the Niners) will soon be called The Pake Colisseum! SF's other ballpark has already gone through three corporate name changes: Pac Bell to SBC to AT&T now. Candlestick along with a new name will soon have a covered bike parking and a pump track.

O.K. enough of the BS... The real news is that we finally decided what to call our nameless frame models.

Our original steel track frame will now be known as the RUM RUNNER. That was submitted by Jude L. on our FaceBook contest. A rum runner was someone who smuggled alcohol during prohibition time. It is also a name of a cocktail.

With that selected, we decided to name our other frames after interestingly named beverages.

The aluminum track frame set is now called FRENCH 75. This is named after a potent drink made with gin and champagne, which in turn was named after the French 75mm, an artillery cannon that really kicked ass in World War I.

We have also selected the name BOILER MAKER for a player to be named later.

For those who are going to piss on these saying we are encouraging young impressionable minds to drink and ride, become bartenders, or go to Purdue....stop there; we aren't. We just want something to call our bikes. 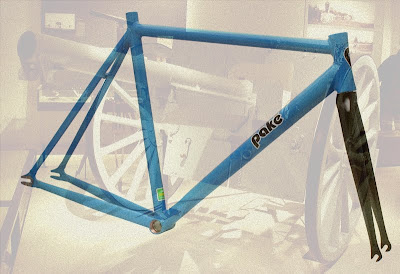 Posted by Ma and Pa K at Wednesday, February 23, 2011 No comments: Links to this post

Email ThisBlogThis!Share to TwitterShare to FacebookShare to Pinterest
Labels: event

Strategies for Getting Around Without Bike Lights (or Pants) from BICYCLE TRANSPORTATION ALLIANCE on Vimeo.

Thank you Bicycle Transportation Alliance. See more here.
Posted by Ma and Pa K at Friday, February 11, 2011 No comments: Links to this post 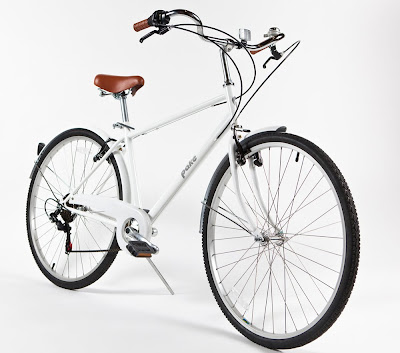 For 2011, we have put on a few upgrades to the our urban cruising bike. This newest round of Urban 6-speeds have nicer hubs, freewheel and rear derailleur, but the price remains the same. It will now come in white as well as the scrappy looking black. The white makes a big difference don't you think?....Has a totally different demeanor now. Makes you want to ride around with flowers n stuff and wipe it down with a hanky after every ride. Just kidding with that last part.
My favorite parts are the sturdy color matched steel fenders and the seat. It looks wide and couch-like, but it is pretty firm. It's not overly soft like you see on some lower priced bikes. Comfortable, but won't your butt numb after 15 miles.
Available in standard 18" and a step-thru 16" model. (Basket and kickstand not included.) 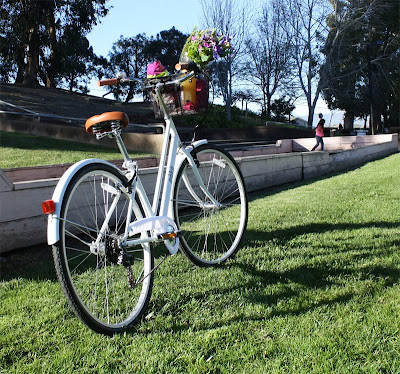 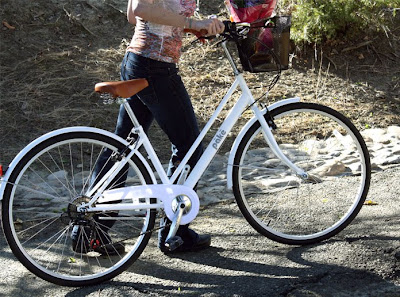 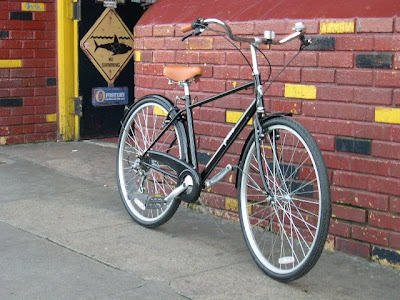 Posted by Ma and Pa K at Thursday, February 10, 2011 No comments: Links to this post 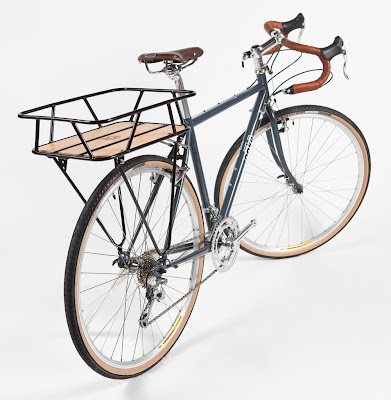 The lucky winner is Shawn Antaya. He gets a C'Mute frame/fork in the his choice of sizes and color. The C'Mute ("kuh-mute") is our versatile, multi-purpose frame. Commute, light touring, single-speed, geared, even run internally geared hubs, which are getting more play these days. The above is our dark gray model built up with a Nitto B135 rando bar, Cardiff saddle and tape, and Gamoh rear basket rack. (Build courtesy of American Cyclery in SF)
Posted by Ma and Pa K at Tuesday, February 08, 2011 No comments: Links to this post