Trophies for the Winners of CMWC 2011

Custom made in Hungary by felvarrom.hu, two amazing trophies for Men and Women winners!!! The CMWC is being hosted in Warsaw, Poland. Starts July 27!
Posted by Ma and Pa K at Saturday, July 23, 2011 No comments: Links to this post 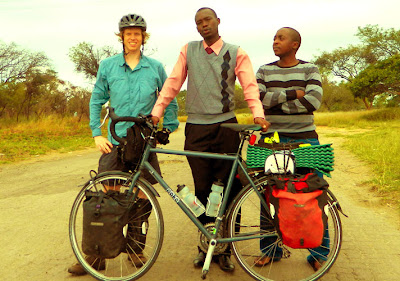 The picture looks like something out of a music video, but this is for reals folks. Two friends (Ben Stewart and Spencer McCormick, both from Wisconsin) riding from Johannesburg, South Africa to Addis Adaba, Ethiopia...one of them (Ben) is riding his trusty Pake C'Mute. As it says on their site, it’s about 7000k or Florida to Alaska or 34,000,000 jumbo hot dogs laid end to end.

They happen to hit Sudan (South Sudan, now) on the historical weekend that South Sudan proclaimed itself a separate country from North Sudan. As of last month the Northern Sudan government troops were raining shells down on an area occupied by a minority group it doesn't like. Fortunately these two aren't going that far north, instead they're heading east into Kenya. Here's an excerpt from their FAQ's.

To most Americans, Africa remains the “Dark Continent.” We travel to Europe, we compare ourselves to China, we see Latin America in our culture daily, but Sub-Saharan Africa is largely ignored. It’s too far away, too poor, of no “strategic interest.” Too many, it’s a wild land of conflict, HIV and extreme poverty.

We think there’s a better, more honest and more hopeful story to Sub-Saharan Africa. For the last couple years, many African nations have enjoyed high economic growth. Vibrant democracies sprout across the continent. The decades long conflict in the Congo has subsided. Primary education is now widespread.

There is a glimmer, just glimmer, of an African renaissance and we think that is a story that needs to be told. Africa is fundamental to the human story. It’s our birthplace and home to one billion. And yet, its stories are largely bypassed. We hope to fulfill that ancient rite of the storyteller, to attempt to inform, to tell us who we are and where we’re going.

Yes! In a car, you can lock the doors, roll up the windows and turn on the AC. On a bicycle there are no shortcuts. We will be fully exposed to the land and its people. Day in and day out, exhausted and exhilarated, we will feel the terrain, every hill, every gully, every pothole, every storm that turns the unpaved road to a river. At times it will be rough. Dogs will run after us. So will children. Some of them will call us names and some will even throw rocks. (Aren’t kids the sweetest?) But likewise, there will be no windshield to protect us from a stranger’s kindness. We pedal through Africa to remind ourselves on the fundamentals of being human.

In addition, it’s worth pointing out: Though we live in era of incomprehensible complexity, i.e. Justin Bieber and nuclear meltdowns, a simple steel frame with two wheels, a chain and some ball bearings can take you across continents. Bicycles are wondrous machines.

Yea. Throughout our ride, we’ll be creatively raising money for World Bicycle Relief and Doctors Without Borders / MSF.

World Bicycle Relief deploys bicycles to increase communities’ economic, health and educational opportunities. Not only are we big fans, but so is Nicholas Kristof.

Medecins Sans Frontieres has been on the frontlines of medical care for nearly 40 years. They won a Nobel Peace Prize. We admire their intrepid spirit and their mission of alleviating human suffering.

Read more at ToAddis.com. View videos on their YouTube channel.
Disclaimer: We did not sponsor them their frame.
Pledge $8.00 or more and they'll send you a postcard from Africa!