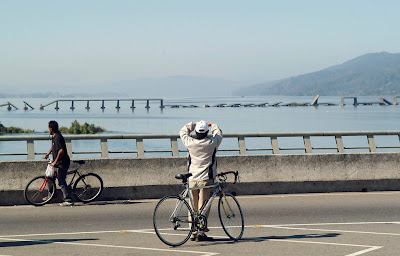 The 8.8 magnitude quake was about 500x more powerful
than the Haiti Quake.
Photo from the Boston Globe
Posted by Ma and Pa K at Saturday, February 27, 2010 No comments:

You Coulda Been A Star! 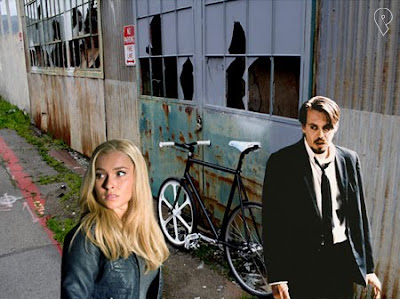 I don't know if other bike makers get contacted like this.
Some guy named Dennis with a heavy New York accent calls us up and says he wants to get a couple of track frames for props in a feature film he is helping out in. He says it would be starring Steve Buscemi of "Reservior Dogs" and "Desperado". We of course are intrigued, because Steve kicks ass. His assistant Natalie e-mails us the next day with the additional information like plot synopsis, what size frame and the filming location to send it. We tried to extra research to find about more about this film searching IMDB and Google for any info on this project and IMTOOFAMOUS Productions. We even Googled the address of the shooting location and it turned out to be a innocuous looking suburban house. We write back and ask nicely for any credentials (even an office address). They haven't written back and it a week past their deadline. So I guess we are out of luck or more likely we were lucky not to fall for this possible scam.

Here is the e-mail below with plot synopsis:

Per your conversation my boss, Dennis Bloom, I’ve enclosed a brief synopsis of the project.

This project will be filmed on location in Eugene, OR ; Key West , FL ; and various sites in Austria .

I don’t know if he mentioned it but we are working on somewhat of a tight timeline with shooting scheduled to begin in March. We will need all items for consideration no later than February 22, 2010. The onsite location address is 18XX Enchantment Eugene, OR 97402.

We ask that considered items be sent in multiples of two to ensure continuity.
Our request is as follows:

If you have questions please feel free to contact Dennis directly at 718.666.XXXX.

In this fast paced high adrenaline tale of cat and mouse, three unknowing adventurers find themselves in a deadly battle of wits.

Reclusive boat builder Rodney Haynes (Steve Buscemi) liked his beer, his boats and little else. But twenty years ago when his brother and sister-in-law went mysteriously missing after a weekend sailing trip, Rodney was unwillingly thrust into a life involving Billy (Josh Duhamel) [Transformers] and Sara (Hayden Panettiere) [NBC's 'Heroes'].

For the last twenty years, Billy and Sara have been pushing life to the limits trying to forget. Sara chose extreme sports. Billy chose bars and women. But when Sara never returns from a day of snowboarding Billy is forced to face reality. And a potentially awful truth.

Enlisting help from his Uncle Rodney, Billy is determined to find out what really happened to his sister…and his parents so many years ago. But it’s going to take a lot more than determination to tip the odds in his favor.

If it turns out this was a real deal, and we blew it, I guess we can take comfort that at least (according to the fixed gear blogs) Obi-Wan Kenobi owns a Pake.
Posted by Ma and Pa K at Thursday, February 25, 2010 2 comments: 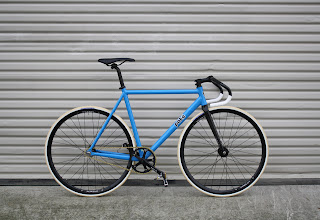 And get the first look at a new track frame we have in the works.
First 3 fans get one of our cycling caps.
Be a fan today!
Posted by Ma and Pa K at Wednesday, February 17, 2010 4 comments:

Favorite Shot of the Month from the Pake Builds Flickr Pool 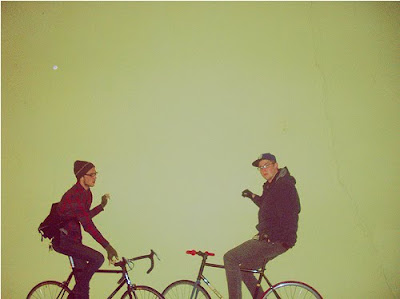 Join or check out our pool.
Check out Travis's photo stream.
Posted by Ma and Pa K at Thursday, February 11, 2010 No comments:

We are proud to be one of the sponsors on Kareem's latest. Death Pedal 2 is the follow-up to the highly successful Death Pedal fixed-gear film. This movie was filmed and edited by Kareem Shehab (Leader Bikes) and showcases the talents of fixed gear freestyle riders from coast to coast across the United States. Featured locales include Los Angeles/Orange County CA, Houston/Austin TX, Atlanta GA, and New York NY. Riders profiled in the film include Corey Vulture (first seen in Council of Doom), Ed "Wonka" Laforte (GoRilla Bikes), Eric Puckett (Volume Bikes), AJ Austin (Milwaukee Bikes), Justin "Congo" Mitchell (Volume Bikes), and Torey "Hfwido" Thornton (Wrahw). This latest installment in the "Death Pedal" series has once again set the bar for Fixed Gear Freestyle.

DVD's Available for pre-order at deathpedal.bigcartel.com
Posted by Ma and Pa K at Monday, February 01, 2010 No comments: